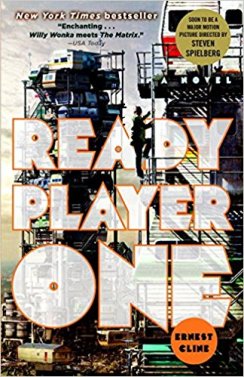 One giant Easter egg filled with 80’s references and gamer culture, Ready Player One by Ernest Cline was an easy, enjoyable read, but left me wanting just a bit more candy inside that plastic shell.

Exposition time: in the year 2044, planet Earth has become such an inhospitable place (climate change, extreme wealth inequality, extremely ineffective government, people living in trailers stacked one on top of the other, etc.) that most people escape reality for the virtual worlds of the OASIS. The OASIS was created by James Halliday and upon his death, he gives all OASIS users a quest to find his Easter Egg…and subsequently inherit his entire fortune and complete control over the OASIS. This hunt inspires the entire world to take up the hunt and obsess over 80’s pop culture—Halliday’s own obsession. Also, Wade Watts is the protagonist and he’s one of these “gunters” (“Easter egg hunters,” but shorter to say) and he’s the first person to ever to find the first key for this hunt.

The character development for Wade is pretty amazing as he gets further and further into this hunt and I think this is one of the strongest aspects of this novel. He changes drastically, and it’s very intriguing to watch how his actual self changes as his OASIS avatar levels up and up and up. But unfortunately, where his development is super awesome, Wade’s storytelling voice just isn’t as strong. It’s very exposition-y, very tell-y and not showy, very “let me tell you everything there is to know about this Halliday guy or this obscure 80’s reference or my videogame crush, Art3mis.” And that same voice carries over to action-packed scenes, too, which make them come across as stale and monotonous.

Cline’s definitely created an expansive world filled with fun eccentricities and minute details that I wanted to explore more of, but for this exemplary world-building, Cline seems to have sacrificed his plot.

I mean, the storyline isn’t bad, but it’s just kinda blah. It’s pretty straightforward with relatively little in terms of twists and turns. There’s the famed Easter egg and Wade Watts is on a mission to find it. That’s pretty much it. Whenever some tension is introduced (i.e. Wade enters a “Gate” or especially when he escapes the IOI headquarters), Wade just breezes through it, sometimes not even giving the reader a picture of how he accomplished a task by jumping to its completion. There never seemed to be any stakes for the characters—even when the actual stakes were life and death.

Maybe it was just the info-dumpy storytelling that downgraded the plot? I don’t know.

What I do know, though, is that this book was still fun. It wasn’t the best book I’ve ever read—it wasn’t even as great as it’s hyped up to be, looking back on it—but I did enjoy reading it. It was fun. I knew exactly how it was going to end thanks to Cline’s predictable prose and I caught maybe one or two of the 80’s references, but I still ate up each and every 80’s-infused page leading up to that finish. I’d recommend it.

From a CA town called "Lard". I like goats, the color orange, & writing things. View all posts by Lawrence Silveira